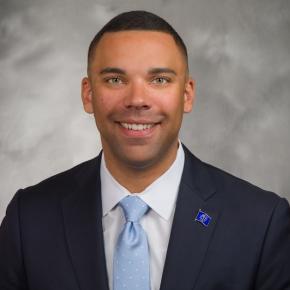 Prior to joining Secretary Lawson’s executive team, Brandon served as Assistant General Counsel for the Indiana Department of Administration. In that role, he served as counsel for procurement, contract and transactional matters, counsel for the Minority and Women’s Business Division, the Director of Executive Branch Lobbying as well as the Ethics Officer for the agency. Brandon has also served as counsel and policy advisor at the Indiana Department of Education.

A native of Lafayette, Brandon graduated from Wabash College where he served as a team captain of the varsity football team. Brandon attended law school at Barry University and earned an MBA in Orlando, Florida. He is currently an officer of the Indianapolis Association of Wabash Men’s Board of Directors, a Penrod Society member and an alumnus of the Indiana Leadership Forum.

Brandon, his wife and daughter reside in Broad Ripple with their two labradors.